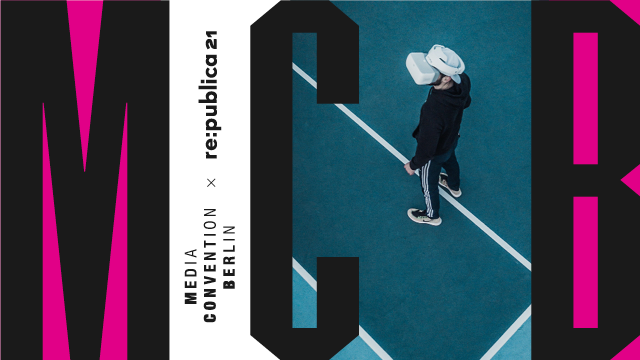 Berlin/Potsdam - Where the beginnings of digitalisation concerned a few millions of venture capital, today entire corporations, careers and democracy itself are at stake. Political pressure on platforms is also increasing, for instance when it comes to ensuring more transparency in user data handling. The sixth edition of MCB in 2019 is dedicated to these enormous economic and societal changes, with the motto being “Playing for Keeps”.

On Monday, re:publica and MEDIA CONVENTION Berlin once again jointly opened both conferences for the sixth time. This year, they will yet again present a number of renowned speakers and exciting topics regarding Internet policy, digitalisation and the media industry. Tickets for both events, which are held at STATION Berlin until 8 May 2019, were nearly sold out once more. More than 9,000 visitors were anticipated.

#MCB19 and #rp19 were opened with a welcoming speech by Federal President Frank-Walter Steinmeier who emphasised that democracy can only succeed if it is also successful digitally. “We only have this one democracy. If we care about it, we should take care of political debate culture on the Internet together!” According to him, it was important that people in a digitalised world not only “network”, but also connect with each other – only this way, democracy could be a living reality. The Federal Minister also pointed out the necessity of economic regulation: “If you want to do business here in Germany, you have to follow the rules. This goes for large American corporations as well. Silicon Valley is now slowly starting to understand that.”

Michael Müller, ruling mayor of Berlin, and Malu Dreyer, Minister President of Rhineland-Palatinate and chairwoman of the federal broadcasting commission, agreed on the following sentiment for the opening of MCB19: we need courage. In his welcoming speech, Michael Müller emphasised the fact that politics needed to take a stance for media literacy and pluralism. Malu Dreyer posed the question of how we intend to shape a digital society. “We don’t have to reinvent a lot here,” said Dreyer. “We just have to transfer our values from the analogue to the digital realm.”

The opening panel “Point of no Return – Going All In with Digital” provided the thematic direction for stage 6 for day 1. Alina Fichter (journalist & consultant), Holger Enßlin (Sky Deutschland), Manuel Uhlitzsch (PANTALEON Films, PANTAFLIX), Eun-Kyung Park (ProSiebenSat.1 Media) and Nadine Bilke of ZDFneo discussed different TV strategies. “You need an appetite for change and transformation. The mindset is what matters. It is a push-and-pull situation where hierarchies also need to be reconsidered,” said Bilke. Go to video “New Players on the Streaming Market”
“In the time I’m speaking here, Google and Facebook will have collected billions of data items and added them to their existing data. And the algorithm stays working.” Federal competition authority president Andreas Mundt used no uncertain terms in his keynote titled “Big Tech reviewed: the competition for data and equal opportunities on the Internet” when it came to the large platforms and explained the competition authority’s Facebook ruling. According to Mundt, it was high time for people to tackle the issue of data processing and to demand equal opportunities on the Internet.

Where the development of VR and AR is concerned, there is also no turning back: In the session “VR & AR: The Art of Immersive Storytelling”, Sven Bliedung (Volucap), Sebastian Sylwan (Felix&Paul Studios) and Karim Ben Khelifa (The Enemy) discussed how to transport immersive content. According to Ben Khelifa, modern journalism was a good example: “VR allows us to go different ways, to learn new approaches.” The session “The Golden Age of Podcasting”, in which Tobias Bauckhage (Creators Media, Los Angeles), Joel Lovell (Pineapple Media, joining via Skype) and Nick Quah (Hot Pod Media, New York) presented highlights from the US podcast scene, focused on the aim to get current journalist content across more creatively than as simple “news”.

Right on time for the upcoming European elections, the initial events of MCB also addressed microtargeting and political advertising on the social web. Regarding the catchword vote rigging, Simon Hegelich, professor for political data science at TU München, advocated for a calm approach: “The media shouldn’t jump on any hot-button topic!” The panel consisting of Semjon Rens (Facebook Germany), Tabea Wilke (botswatch Technologies),Manon Metz (DIRK METZ Kommunikation), Anja Zimmer (Medienanstalt Berlin-Brandenburg) and Daniel Fiene (Rheinische Post) dealt with the question of how political advertising has to be defined to create a clear framework for all and to facilitate fair and effective regulation.

“More time and money must be invested in the development of diverse stories,” said Skadi Loist (Film University Babelsberg) in the session “The stuff of dreams: more diverse perspectives for better content” where she and Tyron Ricketts, actor and Managing Director of Panthertainment, Emrah Ertem (Casting Director) and Martina Zöllner (rbb) discussed how to successfully tell authentic stories beyond stereotypes and clichés.
To conclude day 1, the cast & crew of the German productions “Das Wichtigste im Leben” (“The Most Important Thing in Life”), “Bad Banks 2” and “Die Neue Zeit” (“The New Era”) provided a look behind the scenes in the session “TV Made in Germany – Meet the Team”. Stars Bettina Lamprecht, Jürgen Vogel, Mai Duong Kieu and Anna Maria Mühe were present among others; Louis Klamroth (“Klamroths Konter” – “Klamroth’s riposte”) hosted the session.